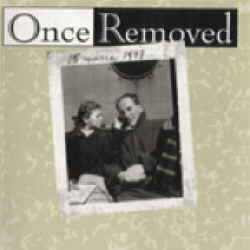 The world according to Applefield is a Janus-head of America and Europe.
"Once Removed" is a wise and moving novel.
---Thomas E. Kennedy, author of "Kerrigan's Copenhagen".

Contains passages of very fine writing, brilliant juxtapositions, and deeply moving meditations on the nature of memory and death. Recommended for all Holocaust collections and possibly important for fiction collections as well; if Applefield continues to write novels, you will want to have his first novel.
--- Library Journal

Once Removed shuttles back and forth between the past and the present, between Poland of the thirties and forties and contemporary America and tracks the last seventeen days of one man's life.
In 1947, Polish camp survivor Jacob Simon and his identity-shocked eleven year old daughter, Dzidzia, leave a devastated Europe and a haunted past.
Forty years later, in the Intensive Care Unit of a prestigious American heart clinic in Houston, Texas, the horrors surface again as experiences are relived and memory itself battles to reconstruct the past.This deeply ironic and poignant story invites a contemporary metaphor for experiencing a world үnce removed.

A remarkable book intertwining lives in ways that are real and symbolic at the same time Applefield is a uniquely talented writer.
---Dr. Sherwin B. Nuland, winner of National Book Award for How We Die

David Applefield, fiction writer, editor, and media specialist, has lived in Paris since the early 1980s. He was educated at Amherst College and Northeastern University. He is the author of "On A Flying Fish, guide books "Paris Inside Out" and "The Unofficial Guide to Paris" and editor of the longest-running expat literary journal in Paris, FRANK. He teaches contemporary culture at the Institut d'Etudes Politiques de Paris (Sciences Po), represents the Financial Times in West Africa, and publishes the popular web site www.paris-anglo.com. He is currently working on his third novel set in Ukraine.

Catherine Byers is an award winning narrator of over 500 books on tape and CD.
She has eight Broadway plays to her credit and has performed on episodic TV, regional theatre and in TV voice-overs.

Listen to chapter 1 of Once Removed: