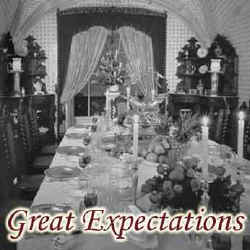 Pip, who came to be named so because his "infant tongue" could make nothing "longer or more explicit" of Philip Pirrip than that, is Great Expectation's protagonist and narrator. Then there is the eccentric and wealthy Miss Havisham who flits around her house in a faded wedding dress and keeps all of her clocks set to twenty minutes to nine. That's the time her lover jilted her. Then there is the beautiful and young Estella who is under Miss Havisham's care. Pip is in love with Estella from the moment he meets her, but Miss Havisham has instilled in Estella her own cruel feelings towards men and teaches her to torment them and "break their hearts". There is a convict who wishes so badly to repay a kind deed and help a young man to become a gentleman, that he goes off to Australia to make a fortune so he can anonymously bequeath it to him. These are just some of the characters you will meet in Great Expectations. Charles Dickens understands the human condition well. There is something in each of his characters to which we can relate. At the beginning of Great Expectations, Pip fears what others might think. This is the only thing that guides his conscience. His feelings of guilt are strong. He has no reliable system by which to judge right and wrong. Because he cannot judge his own actions, he feels guilty even when he does the right thing. Pip is immature and an idealist, but he has a basic goodness about him. He has "great expectations" about his future. It is his desire for self-improvement that drives the novel. Bildungsroman is a German term for "novel of formation". Great Expectations is a novel of formation wherein we follow Pip's development in his passage from childhood to adulthood. Toward the novel's end, Pip comes close to trusting his own feelings and makes a remarkable but simple realization about life. Great Expectations was published serially in England from December 1860 to August 1861, and published in book form in England and America in 1861. David Copperfield notwithstanding, Great Expectations is perhaps Charles Dickens's most autobiographical novel.

Listen to chapter 1 of Great Expectations...